Purpose of old-age and survivors' insurance

Old-age and survivors' insurance allows an almost independent retirement from professional life. Survivors' pensions aim to prevent families already burdened by the death of a close family member to be faced to financial hardship.

Old-age and survivors' insurance is the cornerstone of the Swiss social insurance system. It grants pensions of two basic types: old age pensions to people of retirement age, and so called survivors' pensions to spouses or dependent children of a deceased insured person. Old-age pensions should enable their beneficiaries to retire with a considerable measure of financial autonomy. Survivors' pensions aim to ensure that families already burdened by the death of a close family member are spared financial hardship.

Old-age and survivors' insurance was introduced in 1948. Twelve years later, an invalidity insurance scheme was was set up for the entire population. This grants benefits to those whose capacity to work is seriously impaired or who are unable to work owing to health reasons. Benefits are not restricted to those engaged in gainful employment.They should enable individuals to determine their own lives, while remaining professionally active - if possible - and fully integrated in society.

Until well into the 19th century, the functions that are now covered by old-age and survivors' insurance and invalidity insurance were provided by the family, by charitable organisations and by churches. They took care of the elderly and the disabled, seconded in this task by a rudimentary and often restrictive system of public assistance to the poor. The need for a national (in the case of Switzerland: federal) old-age, survivors' and disability insurance system first made itself felt in the 1880s, brought on by the mass pauperisation of the industrial proletariat. Workers' wages were too low for them to save for times of duress or their old age. The first old-age and survivors' insurance law was put to the popular vote in the 1930s and promptly refused. Henceforth, the federal government contributed an annual sum to the "Für das Alter" foundation (the present-day Pro Senectute). This sum, earmarked for the support of the "needy elderly" was in fact exceedingly modest.

It was only with the institutionalisation of the OASI in 1948 that provision for old age finally supplanted charity.

The three-pillar system, a Swiss particularity

Swiss social insurance is based on the so-called three pillar system, a threefold system of public, occupational and private insurance. Old-age and survivors' insurance and invalidity insurance jointly make up the first pillar with pensions intended to cover basic living costs. When they not do so, there are supplementary benefits to top-up income to the required level.

This first pillar is complemented by a second pillar, the occupational benefit plans concerning old-age, survivors' and invalidity. The first two pillars together should amount to at least 60% of the beneficiary's last income and allow pensioners to maintain the standard of living to which they are accustomed. The first pillar is compulsory for all, including the self-employed or people without gainful employment - parents of either sex who take care of the household or the children, for example. The second pillar is obligatory only for salaried workers. The third pillar - individual provision to meet further needs - is optional, but unlike other forms of savings it offers certain tax benefits.

The three-pillar system, legally embodied in the Swiss Constitution since 1972, is intended to ensure a decent standard of living for people of retirement age and other pensioners.

The first chart shows the amount of pensions in Swiss francs in relation to the annual OASI salary; the second chart shows the amount of pensions as a percentage of the annual OASI salary. Pensions are calculated as follows: The first-pillar pension corresponds to the complete pension as per the prevailing table of OASI pensions; the annual OASI salary is taken as the basis for the calculation. For second-pillar pensions, a theoretical calculation is carried out on the basis of the “golden rule” (i.e., salary development is equal to the interest on pension capital). Benefits from the non-mandatory second pillar and from pillar 3a have been defined such that – overall – a replacement rate of 80% of income is achieved. 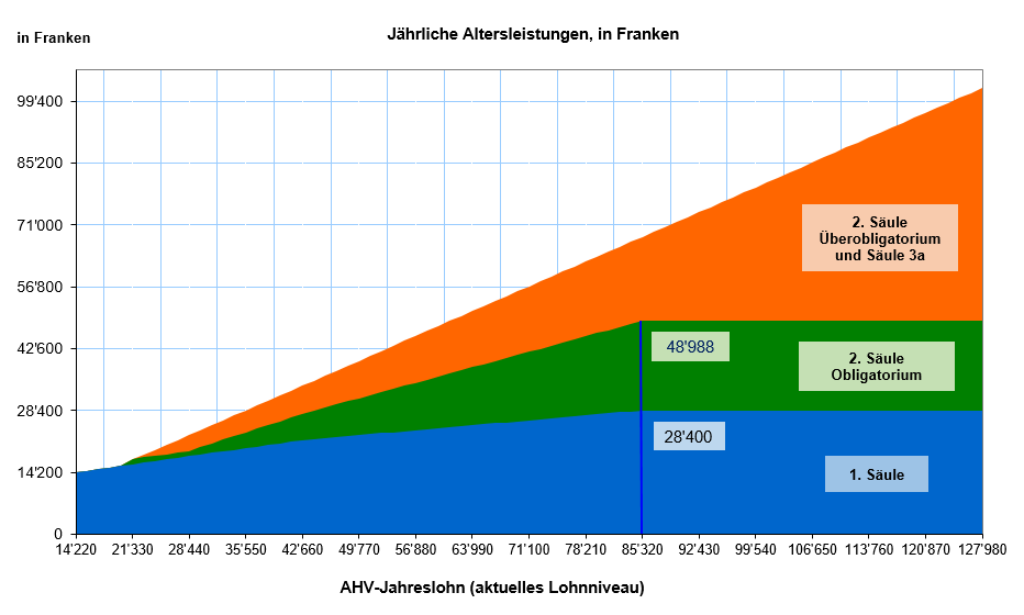 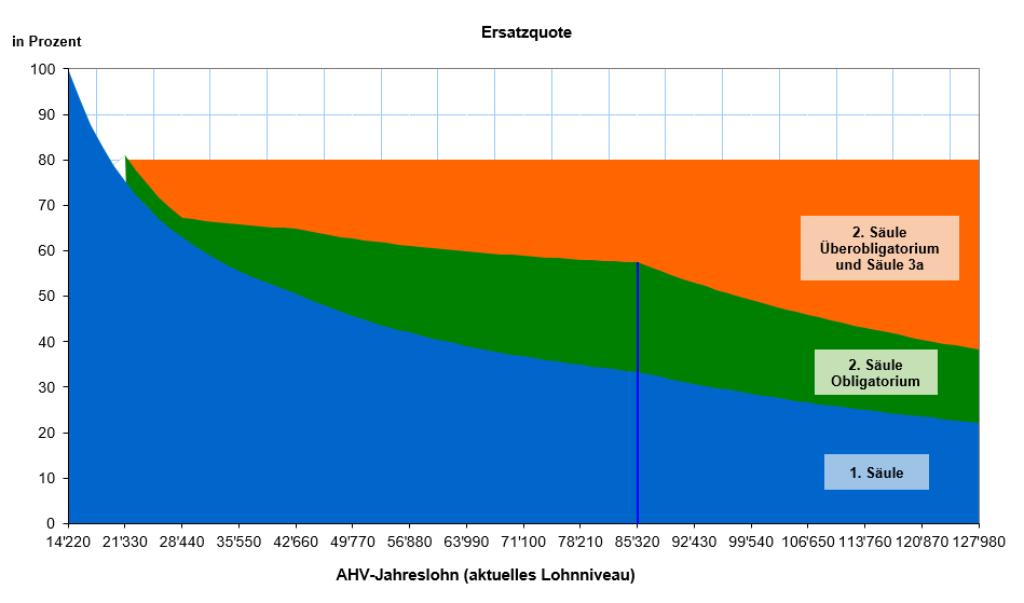 The Swiss government and in particular the Federal Social Insurance Office supervise the old-age, survivors' and invalidity insurance system, seconded in this task by a special federal commission which assesses issues relative to implementation and further evolution and presents its findings to the government.

Both schemes - old-age and survivors' insurance and invalidity insurance - are administered by compensation offices, which collect contributions and pay benefits. There are about 100 such offices, which operate under the auspices of various professional associations, of the cantons, and of the federal administration. Employers are bound by law to do their part in the operation of the system by deducting the employees' contributions from all salaries or salary-like benefits, and paying these, along with the contributions they as employers pay, to the compensation office to which they are affiliated.

All institutions that administer the system are subject to periodic checks by independent auditors.

Numerous other organisations are involved with the OASI at an operational level, for example cantonal tax, debt recovery and public registrars' offices.